Despite the common misconception that quinoa is a grain, this prolific ingredient is in fact a seed native to South America, and is a relative of spinach and beets. While quinoa takes on a similar texture to rice and other pillowy grain bases once cooked, the nutritional value of quinoa is more akin to its leafy vegetable relatives. 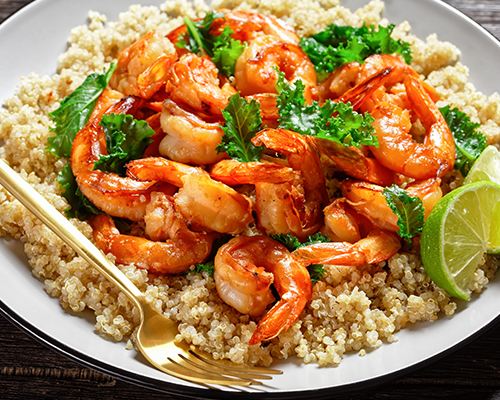 It’s no wonder why quinoa has become one of the most consumed and sought-after health foods in the world, thanks to its high levels of minerals and fiber, and the fact it’s a complete protein, meaning it contains all of the nine essential amino acids. This makes it a rarity, as few plants are complete protein sources.

However, certain varieties of rice have been considered nutritional powerhouses long before quinoa ever came on the scene, and have the potential to provide high amounts of nutrients and fiber for a more affordable price tag. Though there are many varieties of rice in the world, we’ll take a look at the two most prevalent—white and brown—and put them head-to-head against the superfood “grain” that’s taking over.

Though it’s undeniable that white rice has long made a delicious and affordable carbohydrate base for a wide variety of world cuisines, it doesn’t exactly have a stellar nutritional resume. This fluffy grain has a high glycemic index—meaning consuming it can potentially make your blood sugar shoot up quickly and is a refined starch, making its nutritional benefits extremely limited.

In comparison, quinoa is rich in both fiber and protein, and contains much higher amounts of nutrients while allowing for a similar texture. Additionally, quinoa has far fewer calories and carbohydrates than white rice, which contains 40 more calories and 15 times the carbohydrates per cup than the same amount of quinoa. A cup of quinoa will also provide twice the protein and about 5 grams more fiber than the same amount of white rice.

Due to this higher quantity of protein and fiber, quinoa is not only the healthier choice, but will also fill you up faster, allowing for smaller portion sizes. Plus, this surplus of fiber can help to lower cholesterol and control blood sugar levels. This is in stark contrast to the high glycemic white rice, which has the potential to negatively affect your blood sugar levels in an instant.

One advantage brown rice may have over quinoa is its potential to help reduce blood pressure. According to the Mayo Clinic, whole grains like brown rice can help the body effectively use insulin, maintain a healthier weight, and increase potassium levels. However, quinoa has also been shown in studies to have similar effects on the body, making the two ingredients comparable health foods.

While white rice is fairly devoid of nutritional value and will always take the back seat in the health department, both quinoa and brown rice are super nutritious options that are good sources of minerals and fiber, are naturally gluten-free, and aid in essential bodily functions like digestion and blood sugar maintenance.

Quinoa and brown rice contain similar calorie counts and micronutrients per cup serving, and similar amounts of dietary fiber. However, quinoa does have slightly higher amounts of protein and lower carbohydrates per serving, making it narrowly more beneficial to your diet. Additionally, quinoa is a complete protein, unlike brown rice which only contains a few amino acids.

Why You Can't Out Exercise an Unhealthy Diet

What's with the Color of Your Plate?

New Discovery: Brain Circuit that May Control Overeating
back to articles