Insulin resistance is when cells in the body do not respond properly to the communication signals from insulin. This increases the risk of developing prediabetes and, eventually, type 2 diabetes.

How does insulin resistance lead to diabetes?
In a person with prediabetes, the pancreas works increasingly hard to release enough insulin to overcome the body’s resistance and keep blood sugar levels down.

If the pancreas can make enough insulin to overcome the low rate of absorption, diabetes is less likely to develop, and blood glucose will stay within a healthy range.

Insulin resistance and diabetes
Insulin regulates the amount of glucose that circulates in the bloodstream. It induces the cells to absorb glucose, which comes from the food people eat.

Insulin is also the chemical messenger that instructs the liver to store some glucose, rather than release it into the bloodstream.

The liver packages glucose for storage in the form of glycogen. Insulin usually helps the body maintain a good balance of energy, not allowing the level of blood glucose to spike for too long. The reasons for insulin resistance remain complex, and researchers continue to investigate. 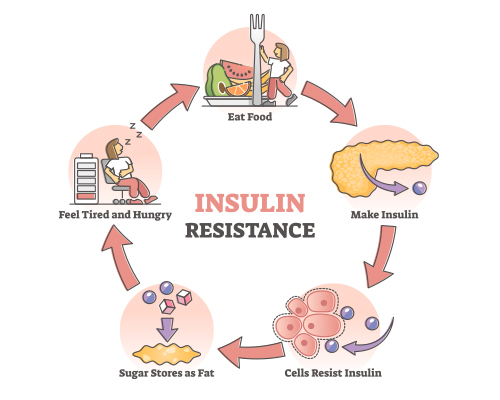 The following steps outline the current understanding of how insulin resistance develops:
1. Insulin loses its ability to support body cells effectively.
2. At first, the pancreas secretes more insulin in order to maintain safe blood sugar levels.
3. The pancreas becomes unable to maintain the release of extra insulin to compensate for the cells’ increasing resistance.
4. Consistently high levels of blood glucose develop, which can lead to prediabetes and type 2 diabetes if an individual is unable to receive treatment and manage blood sugar levels.

Symptoms of insulin resistance
Insulin resistance does not usually present symptoms until diabetes develops. The CDC reports that over 85% of people with prediabetes are probably unaware that they have the condition.

There are also links between insulin resistance and the following health issues:
• Acanthosis nigricans: This skin condition can develop in people with insulin resistance. Thick, velvety patches form on the groin, armpits, and back of the neck. Increases in pigmentation may cause the skin to become darker, depending on a person’s skin tone.
• Polycystic ovary syndrome (PCOS): There are links between insulin resistance and PCOS. The symptoms of PCOS can include irregular menstrual cycles, infertility, and periods that cause pain.
• Vascular disease: An individual with high levels of insulin in their blood may also have an increased risk of vascular diseases, such as heart disease, even if they do not have diabetes.
• Major depressive disorder (MDD): Doctors also associate high levels of insulin in the blood — even without the presence of diabetes — with an increased risk of major depressive disorder.

If someone has concerns about these conditions, they may wish to consider seeking a test for insulin levels and insulin resistance.

Risk factors
The following are risk factors for insulin resistance, prediabetes, and diabetes:
• Being overweight or obese, especially when the extra body weight is around the midriff
• Leading a sedentary lifestyle or one that is low in exercise
• Smoking
• Consuming large amounts of alcohol, which can impact the liver
• Experiencing sleep issues
• Having high cholesterol levels
• Having high blood pressure, which a 2018 study links to an increased risk of insulin resistance

Prediabetes and diabetes have some risk factors in common with heart disease and other cardiovascular and cerebrovascular health problems, such as stroke.

It is not always possible to prevent these risk factors, but some may be avoidable. For this reason, doctors encourage lifestyle measures that can help reduce the risk of the condition.

A number of tests can help diagnose prediabetes and diabetes:
• A1C test: This measures a person’s average blood sugar level over the previous 3 months.
• Fasting blood glucose test: A doctor checks glucose levels after an individual refrains from eating or drinking for 8 or more hours.
• Random glucose test: This involves a medical professional checking blood glucose levels at some point during the day.

Doctors usually request more than one of these tests to ensure an accurate diagnosis. If blood sugar levels consistently fall outside of a normal range, it might indicate that the body is becoming resistant to insulin.

Prevention
It is not possible to change some risk factors for insulin resistance and type 2 diabetes, such as genetic factors and family history. However, a person can take some steps to reduce the likelihood of developing insulin resistance.

Some of the same strategies, such as managing weight or quitting smoking, are key to preventing heart disease and stroke. Experts say that up to 50% of people with prediabetes can prevent the onset of diabetes through such measures.

According to the CDC, if an overweight or obese person loses 5–7% of their body weight, this can significantly reduce their risk of developing diabetes.

Going to Church at Christmas is Good for You

Health Benefits of Collagen Supplements
back to articles