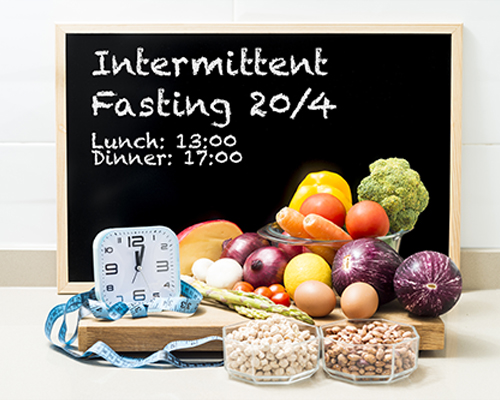 12 Hours – Ketones replace glucose as body fuel
By 12 hours, you’ve entered the metabolic state called ketosis. In this state, your body starts to break down and burn fat.

Some of this fat is used by the liver to produce ketone bodies (ketones). Ketones serve as an alternative energy source for the cells of your heart, skeletal muscle, and brain, when glucose isn’t
readily available.

Did you know that your brain uses up some 60% of your glucose when your body is in the resting state? During intermittent fasting, ketone bodies generated by your liver partly replace glucose as fuel for your brain as well as other organs.

This ketone usage by your brain is one of the reasons that intermittent fasting is often claimed to promote mental clarity and positive mood – ketones produce less inflammatory products as they are being metabolized than does glucose, and they can even kick-start production of the brain growth factor BDNF.

Ketones have also been shown to reduce cellular damage and cell death in neurons and can also reduce inflammation in other cell types.

18 Hours – Fat-burning mode
By 18 hours, you’ve switched to fat-burning mode and are generating significant ketones. You can now begin to measure blood ketone levels above your baseline values. Under normal conditions, the
concentration of ketones in your plasma ranges between 0.05 and 0.1 mM. When you fast or restrict the carbohydrates in your diet, this concentration can reach 5-7 mM.

As their level in your bloodstream rises, ketones can act as signaling molecules, similar to hormones, to tell your body to ramp up stressbusting pathways that reduce inflammation and repair damaged DNA for example.

24 Hours - Autophagy (or cellular repair) begins
At 24 hours of fasting, your cells are increasingly recycling old components and breaking down misfolded proteins linked to Alzheimer’s and other diseases. This is a process called autophagy.

Autophagy is an important process for cellular and tissue rejuvenation – it removes damaged cellular components including misfolded proteins. When your cells can’t or don’t initiate autophagy, bad things happen, including neurodegenerative diseases, which seem to come about as a result of the reduced autophagy that occurs during aging.

Intermittent fasting activates the AMPK signaling pathway and inhibits mTOR activity, which in turn activates autophagy. This only begins to happen, however, when you substantially deplete your glucose stores and your insulin levels begin to drop.

Intermittent fasting is one way in which you can increase autophagy in your cells and possibly reduce the effects of aging. A 2019 study with 11 overweight adults who only ate between 8 am and 2pm showed increased markers of autophagy in their blood after fasting for around 18 hours, compared to control participants who only fasted for 12 hours.

A second study detected autophagy in human neutrophils starting at 24 hours of fasting. In a third study, skeletal muscle biopsies of healthy male volunteers who fasted for 72 hours showed reduced
mTOR and increased autophagy. In mice deprived of food, autophagy increases after 24 hours and this effect is magnified in cells of the liver and brain after 48 hours.

But intermittent fasting is not the only way to enhance the ability of your cells to recycle old components. Some of the known benefits of exercise for overall health have to do with increased autophagy. For example, autophagy induced by exercise delays the progression of heart disease by giving the heart better quality cell parts and reducing oxidative damage.

Exercise, just like intermittent fasting, inactivates mTOR, which increases autophagy in many tissues. Exercise mimics the effects of going without food for an extended period: It activates AMPK as well as autophagy-related genes and proteins.

Part of the reason for this is that ketone bodies produced during fasting promote growth hormone secretion, for example in the brain. Ghrelin, the hunger hormone, also promotes growth hormone secretion. Growth hormone helps preserve lean muscle mass and reduces fat tissue accumulation, particularly as we age. It also appears to play a role in mammalian longevity and can promote wound healing and cardiovascular health.

54 Hours – Insulin reduction
By 54 hours, your insulin has dropped to its lowest level point since you started fasting and your body is becoming increasingly insulinsensitive.

Lowering your insulin levels through Intermittent fasting has a range of health benefits both short term and long term. Lowered insulin levels put a brake on the insulin and mTOR signaling pathways, activating autophagy. Lowered insulin levels can reduce inflammation, make you more insulin sensitive (and/or less insulin resistant, which is especially a good thing if you have a high risk of developing diabetes) and protect you from chronic diseases of aging including cancer.

72 Hours - Cell rejuvenation and renewal stage
By 72 hours, your body is breaking down old immune cells and generating new ones. Prolonged fasting reduces circulating IGF-1 levels and PKA activity in various cell populations. IGF-1, or insulin-like growth factor 1, looks a lot like insulin and has growth-promoting effects on almost every cell in the body. IGF-1 activates signaling pathways including the PKA pathway that promotes cell survival and growth. PKA can also activate the mTOR pathway (and, of interest, too much caffeine during a fast may promote activation of PKA).

You might see where this is leading – pressing the brakes on IGF-1 and PKA through nutrient restriction and fasting can turn down cellular survival pathways and lead to breakdown and recycling of old cells and proteins.

Studies have shown that prolonged fasting (greater than 48 hours), by reducing IGF-1 and PKA, leads to stress resistance, self-renewal and regeneration of hematopoietic or blood cell stem cells. Through this same mechanism, prolonged fasting for 72 hours has been shown to preserve healthy white blood cell or lymphocyte counts in patients undergoing chemotherapy.

How to break a fast
It’s important to break your fast with a nutritious, balanced meal that will further improve the function of cells and tissues that went through cleanup while you were fasting.

A balanced meal includes plenty of vegetables, plant fibers and plant fats, with healthy proteins and some whole grains or legumes if you choose. Avoid simple sugars and processed/packaged foods.

Learn what works best for your body, and what you feel best eating following your fasts.

So what are you waiting for? Try fasting for 12, 16, or even 48 hours or more and change your life. Do talk to your physician before attempting fasts of 48 hours and longer.

Foie Gras: Behind the Controversy

Convert Your House into a Senior-Friendly Home

The 6 Body Parts That Reveal Your Age First

A Very Veggie Christmas
back to articles