Coconut oil is a plant-based oil derived from coconuts. Despite coming from a plant, it’s uniquely high in saturated fats compared to most plant oils.

Coconut oil is about 90% saturated fat, which is a higher percentage than butter (about 64% saturated fat), beef fat (40%), and even lard (also 40%). As such, there’s great debate and controversy as to whether it’s healthy for you.

Due to conflicting research, most experts still recommend limiting your intake of coconut oil. Because of this, you may be confused about how much to take and how to eat it. 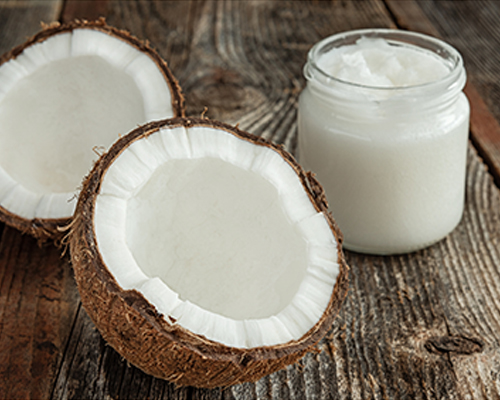 How much coconut oil per day?

Coconut oil can be a nutritious addition to your diet and should be treated like any other fat or oil. Despite purported health benefits of coconut oil, such as weight loss, healthier skin and hair, and increased metabolism, there’s little research that proves these claims. As a result, there is no standard recommended dose of coconut oil for the treatment or prevention of disease.

Instead, it’s recommended to keep your total saturated fat intake from all food sources, including coconut oil, to under 10% of your total daily calories. This would be around 200 calories from saturated fat per day based on a typical 2,000 calorie diet.

Since one tablespoon (14 grams) of coconut oil equals around 117 calories, it’s best to limit yourself to around two tablespoons (28 grams) a day. Keep in mind that this leaves little room for other saturated fat sources, such as butter or shortening.

After this, it’s best to consume mostly unsaturated fats, which are associated with better health outcomes, such as lower LDL (bad) cholesterol levels and reduced risk of heart disease.

Unsaturated fats include nuts, seeds, extra virgin olive oil, and avocados. That said, as long as you moderate your intake of coconut oil, you can definitely enjoy it as part of a healthy diet.

How to eat coconut oil

There are several ways to include this oil into your diet.

1. Use it for cooking
Pure coconut oil has a smoke point of around 350°F (175°C), making it suitable for medium-heat cooking and baking. Highly refined versions may reach slightly higher temperatures but still are not suitable for cooking beyond 400°F (204°C).

What’s more, almost 90% of the fatty acids found in coconut oil are saturated fats, which causes it to be semi-solid at room temperature.

This makes it less ideal for salad dressings or sauces but an excellent choice for stove-top cooking or baking.

Here are several cooking ideas:
• Sautéing or stir-frying: Use 1–2 tablespoons of this oil to cook vegetables, eggs, meat or fish.
• Popcorn: Drizzle melted coconut oil on air-popped or stovetop popcorn.
• Baking: Use it to coat poultry or meat before rubbing with seasonings.

2. Use it in recipes
Coconut oil can be substituted for oil or butter in a 1:1 ratio in most recipes. Be sure to let cold ingredients like eggs or milk come to room temperature before blending it in, so it mixes in smoothly instead of clumping. It’s best to melt it and add to smoothies, and protein shakes gradually.

Storage
Due to coconut oil’s high saturated fat content, it’s semi-solid at room temperature and melts at 76°F (24°C). Therefore, it’s best to store it in a cupboard, rather than the refrigerator, to keep it pliable.

During the colder months or if stored in the refrigerator, it may become very solid and difficult to scoop out of the container. This can be remedied by whipping it with an electric mixer or in a blender.

The bottom line
Coconut oil is a popular yet controversial ingredient. Advocates say it has numerous health benefits, while skeptics say the science suggests otherwise.

Regardless, coconut oil is widely used in many cultural dishes and can be part of a healthy diet. Due to its high saturated fat content, it’s best to stick to no more than two tablespoons (28 grams) a day. Like most things, coconut oil should be enjoyed in moderation.

If you’re interested in trying coconut oil, it’s best used in mediumheat cooking such as sautéing or baking. It should be stored at room temperature in the cupboard to keep it pliable.

The 10 Health Benefits of Coffee

Ultimate High Protein Food for Bodybuilding
back to articles