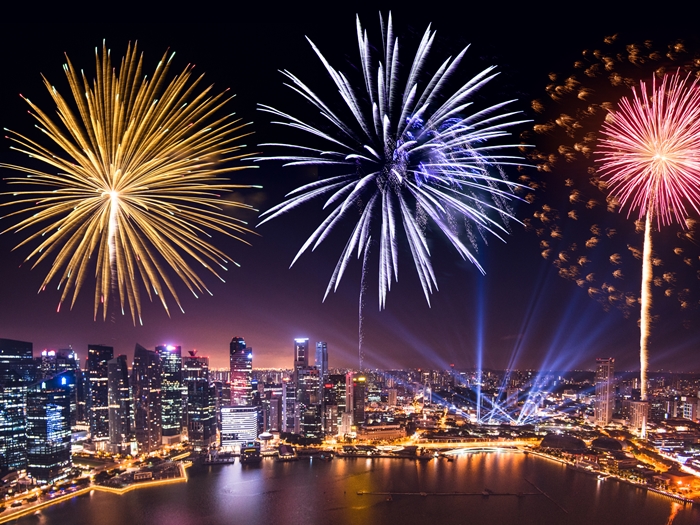 Fireworks and the environment

The bangs and fizzes of fireworks are becoming, the defining sound of New Year’s Eve celebrations in London, while around the world, and city landmarks are becoming stages for increasingly spectacular pyrotechnic displays. Since the millennium, the popularity of fireworks has even extended into back gardens, where smaller fireworks or sparklers are lit up at the stroke of midnight.

Fireworks are great fun. We all enjoy guessing the colours of the rockets before they ignite in the sky, hearing the explosions echo off nearby buildings, or writing our names in light with hand sparklers.

But there is an environmental price to pay. Smoke from fireworks is rich in tiny metal particles. These metals make firework colours, in much the same way as Victorian scientists identified chemicals by burning them in a Bunsen flame; blue from copper, red from strontium or lithium, and bright green or white from barium compounds.

There is more smoke from potassium and aluminium compounds, which are used to propel fireworks into the air. Perchlorates are also used as firework propellants; these are a family of very reactive chlorine and oxygen compounds, which were also used by NASA to boost space shuttles off the launch pad.

Fireworks can lead to substantial air pollution problems. There are well documented examples from cities around the world. In Spain, metal particle pollution from Girona’s Sant Joan fireworks fiesta can linger in the city for days. Across India’s cities, the annual Diwali fireworks cause pollution that is far worse than Beijing on a bad day.

Guy Fawkes Day is regularly the most polluted day of the year in the UK, although scientists from King’s College London have found that pollution from bonfires – the traditional way of marking Guy Fawkes – is also a part of this mixture. Fireworks can have significant effects on air pollution in enclosed spaces, too. In Germany, tests have shown how goal and match celebrations with flares, smoke bombs and other pyrotechnics can fill football stadiums with high concentrations of airborne particles.

And of course, what goes up has to come down. Fireworks that fall to the ground contain residues of unburnt propellants and colourants, while particle pollution in the air eventually deposits on the ground or gets washed out by rain. Some of this finds its way into lakes and rivers, where percolate has been linked to thyroid problems, causing limits to be set for drinking water in some US states. This is a major concern for lakeside resorts and attractions that have frequent firework displays.

Researchers in London have collected airborne particles from fireworks, and these were found to deplete lung defenses far more than pollution from traffic sources, suggesting a greater toxicity. Across India, Diwali fireworks have been linked to a 30% to 40% increase in recorded breathing problems.

While firework particle pollution remains unchecked, there are some simple steps that can be taken to reduce our exposure to firework pollution. For one thing, setting them off in enclosed spaces is a very bad idea, as are hand-held sparklers. Positioning crowds upwind of fireworks displays is another obvious way of reducing their negative health impacts.

Perhaps the best way to tackle the pollution caused by fireworks is not to have them at all. But this seems rather extreme (not to mention a lot less fun). The high-precision, controlled displays that we see at international landmarks on New Year’s Eve demonstrate the great innovation of the fireworks industry. It’s time for this innovative approach to be applied to reduce the environmental impact of fireworks, so that we can continue to enjoy the excitement of displays for years to come.

The Four Negative Sides of Technology

Heel pain? It could be Plantar Fasciitis

Top 10 Foods for Active Women
back to articles