Learn why miscarriage happens, its warning signs, and what to do if it occurs.

It’s smart to learn everything you can about why miscarriage happens, and how to tell if it’s happening to you. Even if not, someone you know could be going through it and need your support. 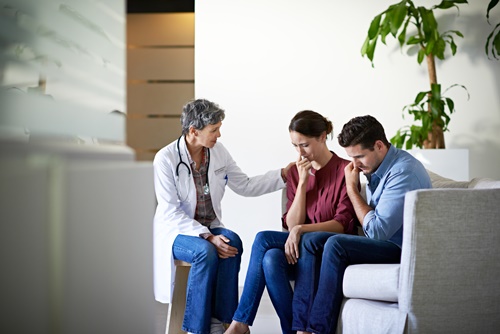 What Is a Miscarriage?

Miscarriage, which is defined as the spontaneous loss of a pregnancy in the first 20 weeks, is the most common type of pregnancy loss. Statistics reflect only the number of miscarriages in confirmed pregnancies; experts believe the actual number is much higher.

More than 80% of miscarriages occur in the first trimester— which is why many women decide to wait before sharing their pregnancy news until they pass the 13th week.

Up to 20% of known pregnancies end in miscarriage. Learn about the most common causes and whether they are preventable.

Issues That Could Cause Miscarriage Include:

Chromosomal problems. During fertilization, the sperm and egg each bring 23 chromosomes together to create 23 perfectly matched pairs of chromosomes. This is a complex process, and a minor glitch can result in a genetic abnormality that prevents the embryo from growing. Researchers blame genetics for most miscarriages. As you age, these glitches are more likely to occur.

Hormone imbalance. About 15% of all miscarriages are attributed to unbalanced hormones, such as insufficient progesterone levels that prevent your fertilized egg from implanting in your uterus.

Uterine problems. Uterine fibroids inside the uterus can interfere with implantation or blood supply to the fetus. Some women are born with a septum, an uncommon uterine defect linked to miscarriage, and others develop bands of scar tissue in the uterus from surgery or second-term abortions that can keep an egg from implanting properly or may hamper blood flow to the placenta. A doctor can determine uterine defects through specialized X-rays; most can be treated.

Chronic illness. Chronic illnesses like autoimmune disorders, lupus, heart disease, kidney and liver disease, and diabetes cause as many as 6% of recurring miscarriages. If you have a chronic illness, find an obstetrician experienced in caring for women with your condition.

High fever. No matter how healthy you are normally, if you develop a high fever during early pregnancy, you may experience a miscarriage. A high core body temperature is most damaging to the embryo before 6 weeks.

What Are Some Other Miscarriage Risk Factors? Other issues that can sometimes result in miscarriage include:

What Are the Most Common Symptoms?

Some women do not experience any symptoms of miscarriage at all; however, possible miscarriage signs besides bleeding include:

Can You Stop a Miscarriage from Happening?

Sadly, there’s no way to stop a miscarriage from happening once it’s started. According to Dr. Landy, however, it is vital to be seen by your doctor and treated to prevent hemorrhaging and/or infection.

What Is a Chemical Pregnancy?

A chemical pregnancy occurs when an egg is fertilized but never implants in the uterus. The fertilized egg signals the body to begin making hCG (human chorionic gonadotropin, sometimes commonly referred to as the pregnancy hormone), which can result in an early positive pregnancy test—even 3 to 4 days before a woman’s first missed period.

Unfortunately, because the egg fails to develop and implant properly, no clinical evidence (such as a gestational sac or placenta) would be found on an ultrasound exam, and the pregnancy is not viable.

What Happens During a Miscarriage?

“Depending on the medical situation, the physical process of losing a pregnancy can vary from person to person,” says Jennifer Jolley, M.D. Some women will start to have bleeding and cramping, which is caused by contractions that are working to expel the contents of the uterus and may pass large blood clots and tissue.

If it happens rapidly, the miscarriage is usually completed by the body -without complications. In the case of a missed miscarriage (when a woman has no symptoms and her body has essentially “missed” the occurrence of fetal demise), a drug can be given to stimulate these contractions.

“If there is concern the woman could continue to bleed heavily without effective passage of the tissue, the recommendation is usually to proceed with quick evacuation of the uterus,” Dr. Jolley explains. “Otherwise, it can become dangerous for the woman.” Dilation and curettage, or D&C as it’s commonly called, is a surgical procedure to complete the miscarriage. Dilation will open the cervix, if it is still closed, and curettage removes the contents of the uterus using a variety of suction and scraping instruments.

When Can I Try For Another Baby After A Miscarriage?

What Are My Chances Of Miscarriage During My Next Pregnancy?

Plastic Recycling Symbols, Get to Know Them

The Joy of Shopping Natural Foods
back to articles