Research has shown that our talent for happiness is, to a large degree, determined by our genes. Psychology professor David T. Lykken, author of Happiness: Its Nature and Nurture, says that “trying to be happier is like trying to be taller.” We each have a “happiness set point,” he argues, and move away from it only slightly.

And yet, psychologists who study happiness – including Lykken – believe we can pursue happiness. We can do this by thwarting negative emotions such as pessimism, resentment, and anger. And we can foster positive emotions, such as empathy, serenity, and especially gratitude. 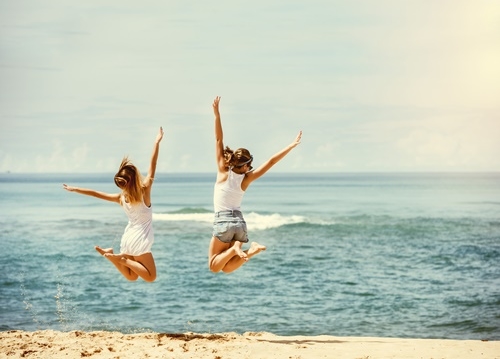 The first step is to make a conscious choice to boost your happiness. Choose to make happiness a top goal. Reprogram your beliefs and values. Learn good self-management skills, good interpersonal skills, and good career-related skills. Choose to be in environments and around people that increase your probability of happiness. The persons who become the happiest and grow the most are those who also make truth and their own personal growth primary values.

In short, we may be born with a happiness “set point”, but we are not stuck there. Happiness also depends on how we manage our emotions and our relationships with others. For example, when someone upsets you, in your mind, you build a case against that person, but that’s very damaging to relationships. So, it may be better to learn to shut up your inner lawyer and stop building these cases against people.

In his book, Authentic Happiness, psychologist Martin Seligman encourages readers to perform a daily “gratitude exercise.” It involves listing a few things that make them grateful. This moves people away from bitterness and despair, he says, and promotes happiness.

Holding a grudge and nursing grievances can affect physical as well as mental health, according to a rapidly growing body of research. One way to curtail these kinds of feelings is to foster forgiveness. This reduces the power of bad events to create bitterness and resentment.

The alternative to forgiveness is mulling over a transgression. This is a form of chronic stress, says Worthington. Rumination is the mental health bad boy. It’s associated with almost everything bad in the mental health field – obsessive-compulsive disorder, depression, anxiety – probably hives, too.

“The key is a commitment to doing the things necessary to retrain the elephant,” Haidt says. “And the evidence suggests there’s a lot you can do. It just takes work.” For example, you can practice meditation, rhythmic breathing, yoga, or relaxation techniques to quell anxiety and promote serenity. You can learn to recognize and challenge thoughts you have about being inadequate and helpless.

Research shows that once income climbs above the poverty level, more money brings very little extra happiness. Yet, “we keep assuming that because things aren’t bringing us happiness, they’re the wrong things, rather than recognizing that the pursuit itself is futile,” writes Daniel Gilbert in his book, Stumbling on Happiness. “Regardless of what we achieve in the pursuit of stuff, it’s never going to bring about an enduring state of happiness.”

There are few better antidotes to unhappiness than close friendships with people who care about you, says David G. Myers, author of The Pursuit of Happiness. One Australian study found that people over 70 who had the strongest network of friends lived much longer.

“Sadly, our increasingly individualistic society suffers from impoverished social connections, which some psychologists believe is a cause of today’s epidemic levels of depression,” Myers writes. “The social ties that bind also provide support in difficult times.”

People are seldom happier, says psychologist Mihaly Csikszentmihalyi, than when they’re in the “flow.” This is a state in which your mind becomes thoroughly absorbed in a meaningful task that challenges your abilities. Yet, he has found that the most common leisure time activity – watching TV – produces some of the lowest levels of happiness.

To get more out of life, we need to put more into it, says Csikszentmihalyi. “Active leisure that helps a person grow does not come easily,” he writes in Finding Flow. “Each of the flow-producing activities requires an initial investment of attention before it begins to be enjoyable.”

So, it turns out that happiness can be a matter of choice – not just luck. Some people are lucky enough to possess genes that foster happiness. However, certain thought patterns and interpersonal skills definitely help people become an “epicure of experience,” says David Lykken, whose name, in Norwegian, means “the happiness.”

Publisher's Page: Be Good. Be Green.