Bell’s palsy is also known as “acute facial palsy of unknown cause.” It’s a condition in which the muscles on one side of your face become weak or paralyzed. It affects only one side of the face at a time, causing it to droop or become stiff on that side.

It’s caused by some kind of trauma to the seventh cranial nerve. This is also called the “facial nerve.” Bell’s palsy can happen to anyone. But it seems to occur more often in people who have diabetes or are recovering from viral infections. Most of the time, symptoms are only temporary. 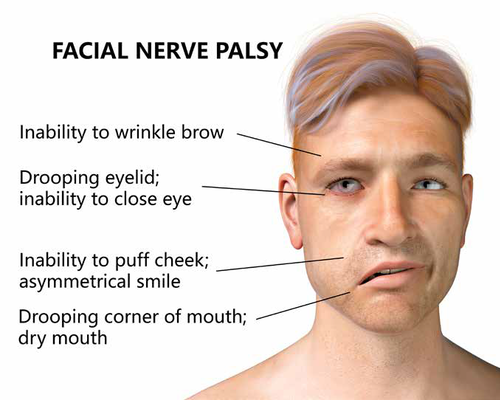 Bell’s Palsy Symptoms
If it happens to you, you may fear you’re having a stroke. You’re probably not. A stroke that affects your facial muscles would cause muscle weakness in other parts of your body, too.

Symptoms of Bell’s palsy come on suddenly. You may go to bed one night feeling fine. But when you look in the mirror the next morning, you see that part of your face seems to be drooping. Once these symptoms happen, they get worse over the next 48 to 72 hours.

The most noticeable sign is weakness and drooping on one side of your face. You’ll find it hard to close your eye on that side or make facial expressions like smiling. Your face may even be completely paralyzed on that side. It’s rare, but Bell’s palsy can sometimes affect the nerves in both sides of your face.

Besides the weakness and drooping of facial muscles, you may:
• Drool
• Feel pain in your jaw or behind your ear on the side that’s affected. Some people notice pain behind their ear 1 or 2 days before any weakness.
• Have a headache
• Have less sense of taste
• Have dry eyes and mouth
• Hear ringing in your ears (tinnitus)
• Be more sensitive to sound on the side that’s affected. (Sounds seem much louder than normal in the days before you notice any other symptoms.)
• Find it hard to talk
• Have trouble eating and drinking

Once they happen, symptoms usually get better over the next 3 weeks or so. Most people — up to 80% — have no symptoms at all within 3 to 6 months. Some people who get Bell’s palsy have a longer recovery period. In rare cases, they may have some permanent symptoms.

Bell’s Palsy Causes
Most doctors believe that it’s due to damage to the facial nerve, which causes swelling. This nerve passes through a narrow, bony area within the skull. When the nerve swells -- even a little bit -- it pushes against the skull’s hard surface. This affects how well the nerve works.

Researchers have long believed that viral infections may also play a role in the development of Bell’s palsy. They’ve found evidence that suggests the herpes simplex 1 virus (a common cause of cold sores) may be responsible for a large number of cases.

Who Does Bell’s Palsy Affect?
Bell’s palsy most often happens in people between 15 and 60 years of age. It’s equally likely to affect men and women. But you may be more likely to get it if you’re pregnant, especially during the last 3 months or in the first week after you’ve given birth.

You also have a greater chance of it if you have:
• A respiratory infection such as a cold or the flu
• An autoimmune disease
• Cold sores
• Diabetes
• High blood pressure
• Mononucleosis
• Shingles

Bell’s Palsy Diagnosis
There’s no lab test for Bell’s palsy. In fact, doctors usually find out through what they call a diagnosis of exclusion. That means in most cases, they diagnose Bell’s palsy only after ruling out other conditions.

Your doctor will start by doing a complete and careful physical exam. They’ll examine your face and ask you to make different facial expressions to see how your muscles act. If they suspect Bell’s palsy, they’ll try to close your eyelid on the affected side of your face. If it doesn’t close, it’ll signal that you have something called the Bell phenomenon. This is when your eye rolls upward and outward when you try to close it. This is usually enough for them to make the diagnosis.

Your doctor will then try to rule out other conditions. They’ll probably test your hearing and sense of balance. If there’s a chance that another condition is at play, your doctor may order an electromyography (EMG) test to measure the electrical activity inside the muscles. This can tell them if the nerves are definitely damaged and if so, how much. It may also help them predict how fast and fully you’ll recover.

Your doctor may also run an imaging test, such as skull x-rays, an MRI, or a CT scan, to make sure something like a tumor or bone fracture isn’t pressing on your nerves. A blood test can also help rule out diabetes or an infection.

Most people with this condition make a full recovery whether they get treatment or not. But there are some treatments that may help you heal faster.

Your doctor may give you a short course of corticosteroids (like prednisone). These can help ease swelling and make it more likely that your nerve function will get back to normal. This may shorten the duration of your Bell’s palsy symptoms. They work best if you take them within 72 hours of the start of your symptoms.

If your doctor suggests that your symptoms might be triggered by the herpes virus (herpes simplex 1) or by shingles (herpes zoster), they may give you an antiviral medication. Taking an antiviral like acyclovir and valacyclovir along with the steroids may help restore function, but there isn’t definite proof of this.

If your palsy affects your ability to blink and close your affected eye, you’ll need to protect it. Use eye drops or an ointment to keep it moist. Wear an eye patch to keep dirt and dust out and moisture in.

Finally, your doctor may suggest massage of your facial muscles. Surgery isn’t recommended as a first treatment option for Bell’s palsy. But you might need it if your symptoms don’t go away or if you have complications.

Aztec Clay Mask for Acne
back to articles