Manuka honey is made by bees from the nectar of the manuka bush, which grows in New Zealand and is famous for its antibacterial properties. Some experts believe that it can boost your immune system and even improve gut health. It’s also used for wound healing in hospitals and to soothe inflammatory skin conditions like eczema and psoriasis. It can be used to soothe a sore throat and is thought to help persistent upper respiratory tract infections. 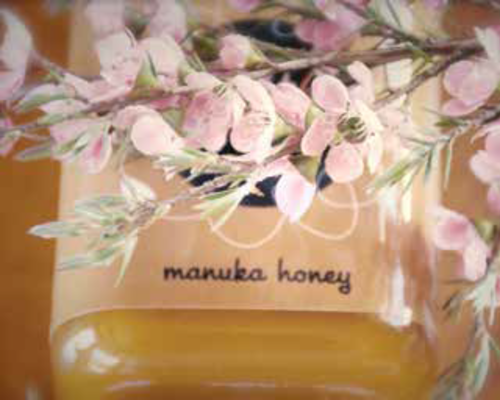 In fact new research, from the University of Swansea, shows that manuka honey could offer an antibiotic alternative to treat antibiotic resistant respiratory infections, particularly the deadly bacteria found in Cystic Fibrosis (CF) infections. In their study, the manuka honey killed 39% antimicrobial resistant bacteria compared to 29% for antibiotics. Manuka honey also improved the activity of some antibiotics that were unable to function effectively by themselves. Used together, honey and antibiotics killed 90% of the bacteria tested.

It’s the undisputed king of honeys. Loved by sports stars, film stars and TV celebrities alike, but not all manuka honeys are created equal. Some Manuka honeys from major retail outlets, contain very little of the all-important active bug-fighting component, methylglyoxal or MGO, for which the honey is famous. If you are looking for manuka honey with health-giving properties, what should you look for?

Tip #2: Check the MGO strength
The MGO scale starts around 30 and goes up to 840. The higher the number the stronger the anti-microbial properties. Unfortunately, some honey companies dilute their manuka honey by
blending it with other cheaper types of honey and still call it manuka – which is perfectly legal since is does contain some of genuine article – but you’ll also be getting a lot less, if any, of the potent active ingredient and the MGO rating will reflect this.

Tip #3 Buy mono-floral honey
The New Zealand government has come up with two classifications for manuka honey: multi-floral and mono-floral manuka. Multi-floral, by definition, is a blended honey, but the New Zealand government have made way for it as a lot of honey that is sold as manuka is multi-floral, because the bees go to different plants, but it does mean you get a lower MGO rating. If it doesn’t state mono-floral on the label, it’s most likely a blend, says Charlton.

If you want a premium product look for a mono-floral manuka honey from a reputable brand like Manuka Doctor, which can trace back every honey not just to New Zealand, but to a particular bee hive site.

Tip #5 Look for the gold ‘Tested Certified Manuka’ symbol on the honey jars
To maintain standards, the New Zealand government have come up with a number of authenticity markers, including four bio-chemicals that should be in the manuka honey to prove it is genuine. They also look for the presence of manuka pollen.

If the honey doesn’t contain all five markers, it can’t legally be exported and labelled as manuka honey – so look for the gold ‘Tested Certified Manuka’ symbol on honey jars which prove it has met the requirement.

Tip #6 Look for the ‘Hive to Home’ promise
Reputable honey sellers, like Manuka Doctor, can trace any jar of honey back to the beekeeper who harvested it because they keep records of exactly which drums of honey go into every batch they sell.

When buying manuka honey, check that the packaging promises traceability from ‘hive to home’ – if it doesn’t, you can’t be confident it’s come from a hive of real New Zealand manuka honey.

Dealing with a Slow Learning Child

Scoliosis: Do’s and Dont's
back to articles