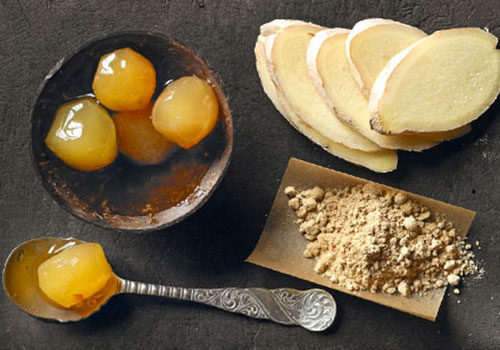 A culinary spice and medicinal marvel, here’s the nutritional low-down on this versatile seasoning.

The Zingiberaceae botanical family to which ginger belongs includes three spices: turmeric, cardamom and ginger. From ancient India and China to Greece and Rome, the rhizome (root) of ginger has been revered as a culinary and medicinal spice. Gingerbread, ginger beer and preserved ginger are all familiar products. But ginger is more than a seasoning --- its medicinal properties have been valued and used throughout the ages.

Ginger is available in various forms:

THE BENEFITS OF GINGER TEA

Ginger tea is great to drink when you feel a cold coming on. It is a diaphoretic tea, meaning that it will warm you from the inside and promote perspiration. It is also good when you don’t have a cold and just want to warm up!

To make ginger tea Steep 20-40 grams of fresh, sliced ginger in a cup of hot water. Add a slice of lemon or a drop of honey if you fancy.

THE ORIGIN OF GINGER ALE

In English pubs and taverns in the 19th century, bartenders put out small containers of ground ginger for people to sprinkle into their beer. And it was the ancient Greeks who prized ginger so highly that they mixed it into their bread, creating the first gingerbread.

The many curative properties of ginger are widely researched. Used on the skin, it can stimulate the circulation and soothe burns. As a diaphoretic it encourages perspiration, so it can be used in feverish conditions such as influenza or colds. The root, which is the part of the plant most widely used in alternative forms of medicine, is rich in volatile oils. It is these oils that contain the active component, gingerol.

Historically, ginger has a long tradition of being very effective in alleviating discomfort and pain in the stomach. Ginger is regarded as an excellent carminative, a substance that promotes the elimination of excessive gas from the digestive system and soothes the intestinal tract. Colic and dyspepsia respond particularly well to ginger.

Ginger also contains very potent anti-inflammatory compounds called gingerols. These substances are believed to explain why so many people with osteoarthritis or rheumatoid arthritis experience reductions in their pain levels and improvements in their mobility when they consume ginger regularly. Gingerols inhibit the formation of inflammatory cytokines, or chemical messengers of the immune system.

What You Need to Know About Childhood Vaccines

What Causes Men to Have Hard, Fat Bellies?
back to articles