At least a dozen types of rice provide different textures, tastes and nutritional value. Brown and wild rice contain the whole grain, meaning that both the germ and the bran of the grain are preserved. Consequently, brown and wild rice are considered healthier because they contain more nutrients and fiber. In contrast, white varieties of rice have the germ and bran of the grain polished away, which diminishes their nutritional profile and increases their glycemic load, or impact on blood sugar levels. Talk to a nutritionist about the benefits and potential drawbacks of adding more rice to your diet. 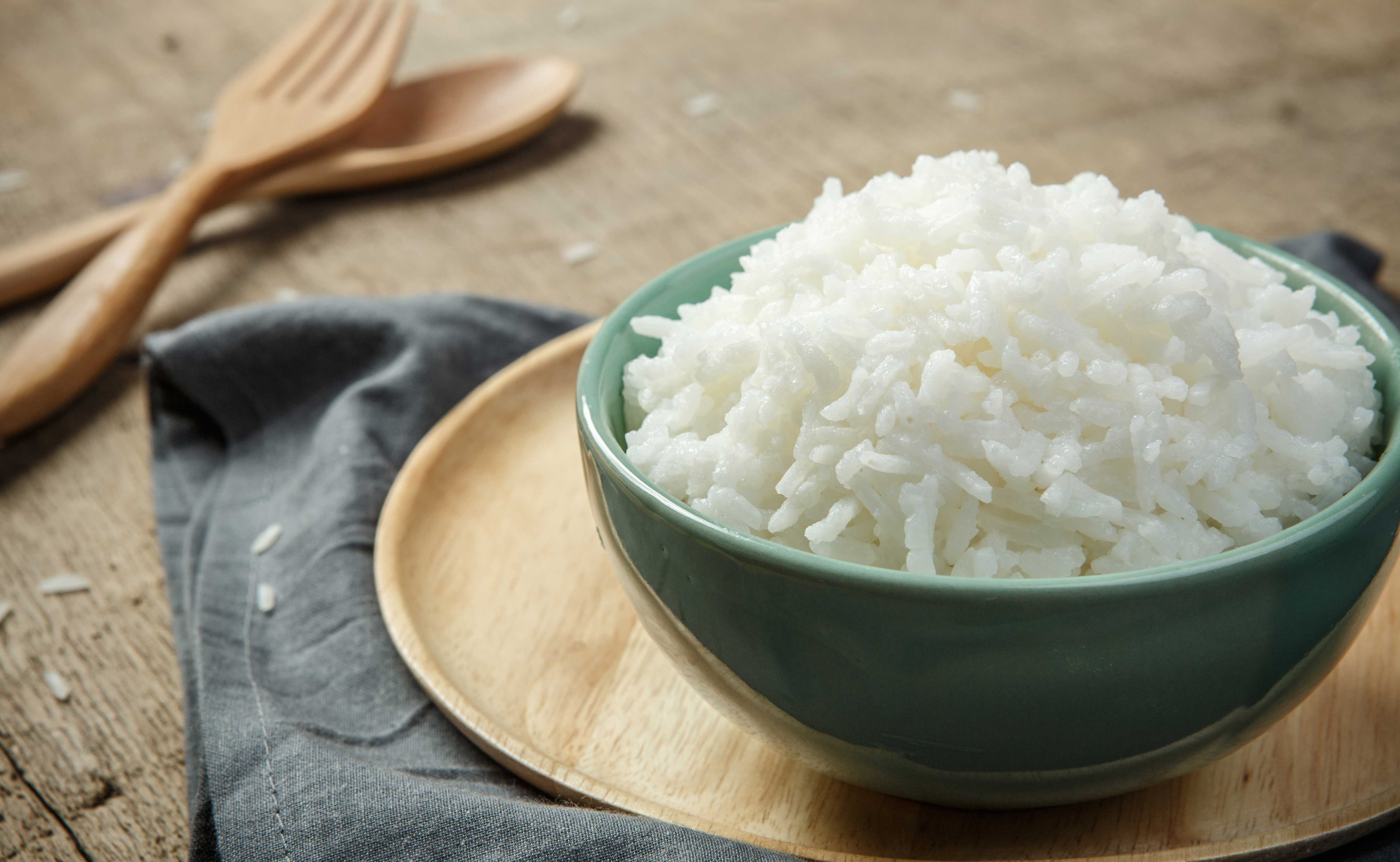 White rice comes in short-grain and long-grain varieties. Short-grain rice is very starchy and becomes soft and sticky when you cook it, which makes it ideal for sushi. Short-grain rice is also used in paella and risotto dishes, and sometimes mixed into chili and stews. Long-grain rice, such as jasmine and basmati, contains less starch, so the cooked grains are drier and don’t clump together. White rice is about 90 percent carbohydrate, 8 percent protein and 2 percent fat, according to the book “Contemporary Nutrition: Functional Approach.”  White rice is a good source of magnesium, phosphorus, manganese, selenium, iron, folic acid, thiamine and niacin. It is low in fiber and its fat content is primarily omega-6 fatty acids, which are considered pro-inflammatory. 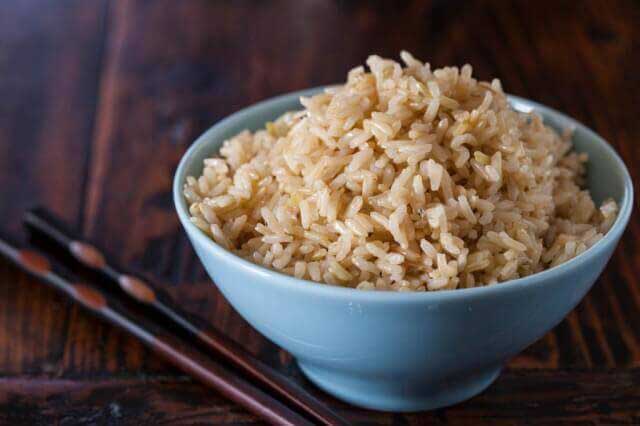 Brown rice also comes in both short-grain and long grain varieties. Brown rice is chewier and heartier than white rice, and takes almost twice as long to cook because it contains less starch. Brown rice is a whole grain and contains as much as four times the fiber of white rice. Fiber slows down the rate at which carbohydrates convert into glucose in the bloodstream, helping to stabilize blood sugar levels. As such, brown rice has a lower glycemic load compared to white rice. Brown rice is about 85 percent carbohydrate, 8 percent protein and 7 percent fat.  It has more minerals, especially magnesium, than white rice. 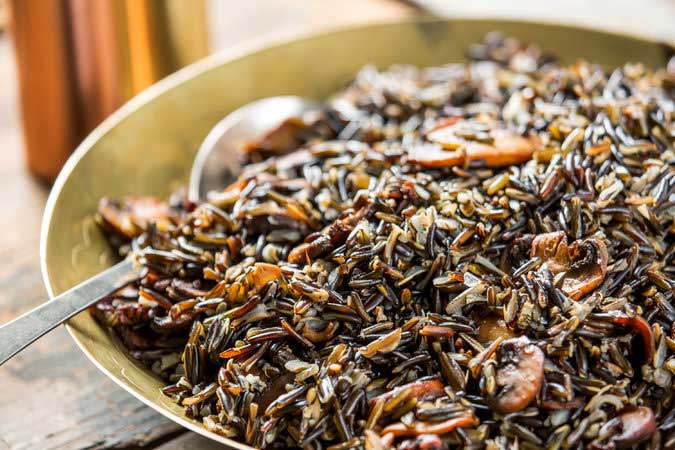 Wild rice is technically considered a grass, although it is sold as rice. It is even more nutritious than brown rice in many ways, as it contains more protein and higher levels of vitamin A and folic acid, according to the book “Superfoods: The Healthiest Foods on the Planet”.  Wild rice contains less starch, which gives it a lower glycemic load, and has more omega-3 fatty acids, which deter inflammatory reactions. However, wild rice varieties often have less mineral content compared to brown rice.

Although wild rice and brown rice have lower glycemic loads than white rice, no type of rice can really be considered a low glycemic food.  Consequently, diabetics should not adopt diets heavy on rice, especially short-grain, white varieties. Brown basmati rice has the lowest glycemic load and contains many minerals and vitamins, so it is often considered a healthy choice. If you have arthritis, wild rice is the only variety that doesn’t promote inflammation.

DOES RICE MAKE YOU FAT?

There isn’t one simple answer to whether rice makes you fat. Rice can contribute to weight gain, but it all depends on how much you eat throughout the day. The potential impact of rice on your weight also varies according to the type of rice and its fiber content.

There’s no secret about how you lose or gain weight. When you eat more calories than you use through daily activities, you gain weight. Depending on activity level, women should get 1,800 to 2,400 calories daily and men should aim for 2,200 to 3,000, according to the USDA’s Dietary Guidelines. Don’t reduce your calories significantly lower than the amount that fits your lifestyle, because your body needs the fuel to operate at optimal capacity.  To figure out whether rice might make you fat, its calories must be balanced within your total daily caloric intake.

The calories you’ll get from rice vary slightly between white and brown rice. One cup of cooked white rice has 205 calories, compared to 216 in brown rice. Rice illustrates the value of portion control because it’s easy to put more than 1 cup of rice on a plate, whether as the base for a stir-fry dish or as a side dish. From the perspective of calories alone, rice won’t make you fat as long as the total calories you gain from rice don’t put you over your daily calorie goals.

The type of carbohydrate in your diet makes a difference when it comes to weight control. Research suggests that people who eat more fiber are less likely to gain weight. Refined grains, such as white rice, cause blood sugar and insulin to rapidly rise, which makes you feel hungry. In the long term, spikes in blood sugar may make you gain weight, according to the Harvard School of Public Health. Eating more fiber also lowers the risk of developing diabetes and cardiovascular disease.

Fiber in Rice Brown rice is a whole-grain that still has all its natural fiber.  When rice grains are processed to produce white rice, the bran and germ are removed, which means it’s no longer a whole grain. The bran and germ contain almost all of the fiber and many other nutrients. White rice can be enriched with minerals and vitamins, but the fiber can’t be added back. Both types have about 45 grams of total carbohydrates in 1 cup of cooked rice, but brown rice has 3.5 grams of fiber, which is six times more than the 0.6 grams in white rice.

The ABCD’s of Supplements

Falling For Freekeh
back to articles