If you’ve dreamt of eating chocolate every day, now you have an excuse — or eight. Scientific studies have shown that dark chocolate (sorry, milk and white chocolate don’t count) is rich in antioxidants and packed with nutrients, making this bittersweet treat a superfood favorite. 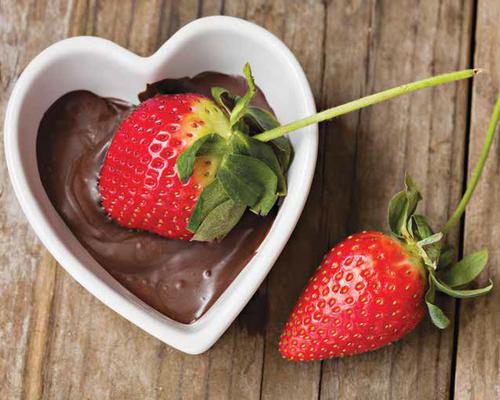 Dark chocolate contains phytonutrients called flavonoids, which are plant chemicals that act as antioxidants and may play a role in cancer prevention, heart health, and weight loss, noted an article published in December 2016 in the Journal of Nutritional Science.

The cacao plant that chocolate is derived from also contains a compound called theobromine, which Toby Amidor, RD, a cookbook author and nutrition expert for the Food Network, says can help reduce inflammation and potentially lower blood pressure.

“Cacao is packed with numerous antioxidants — actually more than green tea or red wine,” she says. “The darker you go, the more antioxidants you’ll get, but there needs to be a balance between eating palatable dark chocolate and getting the health benefits.”

Even though quality dark chocolate is a better choice than milk chocolate, it is still chocolate, meaning it’s high in calories and saturated fat. To avoid weight gain, Amidor recommends eating no more than 1 ounce of dark chocolate per day. Now, a look at what this treat offers.

1. Dark Chocolate May Help Prevent Heart Disease and Lower the Risk of Stroke

One of the biggest benefits that researchers tout is the role dark chocolate may play in improving heart health. A meta-analysis of eight studies on the link between chocolate consumption and cardiovascular disease found that people who ate more chocolate per day had a lower risk of both heart disease and stroke.

2. Dark Chocolate May Prevent Memory Loss, and Boost Your Mood

Out of eight studies on chocolate and mood, five showed improvements in mood, and three showed “clear evidence of cognitive enhancement,” according to a systematic review. Further research found that eating 48 grams of organic chocolate with 70 percent cacao increased neuroplasticity in the brain, which could have positive effects on memory, cognition, and mood.

Improvements in brain health may be due to the high levels of flavonoids in dark chocolate, which research, like a study published in April 2018 in The FASEB Journal, has found to have accumulated in regions of the brain responsible for learning and memory.

Eating chocolate every day doesn’t sound like the best way to prevent diabetes, but studies have shown healthy amounts of dark chocolate rich in cacao could actually improve how the body metabolizes glucose. Insulin resistance causes high blood glucose (sugar) and is the hallmark of type 2 diabetes. Flavonoids in dark chocolate were found to reduce oxidative stress, which scientists think is the primary cause of insulin resistance. By improving your body’s sensitivity to insulin, resistance is reduced, and in turn the risk of diseases like diabetes decreases.

While researchers agree dark chocolate possesses many health benefits, further study is needed to determine if there is a causeand- effect relationship between chocolate consumption and diabetes risk.

4. Dark chocolate Is Good for Your Gut and May Help With Weight Loss

Eating chocolate every day probably seems like the worst way to lose weight, but research suggests dark chocolate may play a role in controlling appetite, which in turn could help with weight loss.

5. It Fights Free Radicals and May Play a Role in Cancer Prevention

Evidence that dark chocolate possesses properties that could help protect people from certain types of cancer is limited but growing. Antioxidants protect our cells from damage caused by free radicals, which are unstable oxygen molecules thought to be responsible for aging and diseases.

Some studies have shown that people who eat many flavonoids or antioxidant-rich chocolate develop fewer cancers than those who don’t consume them. Of the many flavonoids in chocolate, two in particular, epicatechin and quercetin, are believed to be responsible for the cancer-fighting properties.

Vitamins and minerals found dark chocolate like copper, iron, and magnesium (to name a few) are also beneficial to your skin.

Manganese, for example, supports the production of collagen, a protein that helps keep skin looking young and healthy. Other minerals, like calcium, help repair and renew skin, which is pretty important because, according to the American Academy of Dermatology, our bodies can shed up to 40,000 skin cells each day! Several earlier studies have also found the high levels of antioxidants in dark chocolate may protect skin from the powerful ultraviolet (UV) rays emitted by the sun.

Dark chocolate is also touted as a cholesterol-lowering food. A handful of almonds, dark chocolate, and unsweetened cocoa showed a significant drop in low-density lipoproteins (LDL), also known as “bad” cholesterol, which in high amounts can clog arteries.

The cocoa butter in dark chocolate may also play a part in raising high-density lipoproteins (HDL), or “good” cholesterol. Cocoa butter contains oleic acid, which is a monounsaturated fat — the same fat you find in heart-healthy olive oil. However, unlike olive oil, cocoa butter is also high in saturated fat, which in excess can be harmful to the heart, further emphasizing the need for portion control.

8. Dark Chocolate Is Nutritious and Delicious!

On top of all the other potential benefits, one thing is for sure: Dark chocolate contains a ton of nutrients. Of course, the darker the chocolate the better, but any 70 percent dark chocolate or higher contains antioxidants, fiber, potassium, calcium, copper, and magnesium. It also contains a good chunk of calories and fat, so be mindful of your daily intake. Each brand of chocolate is also processed differently. Going organic is always best because it’s grown without the use of chemical fertilizers and pesticides, and we recommend always checking the ingredient list to make sure you’re consuming chocolate with fewer and more natural ingredients.

The Mental Health Benefits of Chess

How to Look After Your Vital Organs

The Health Benefits of a Gluten-Free Diet

Reading Food Labels
back to articles