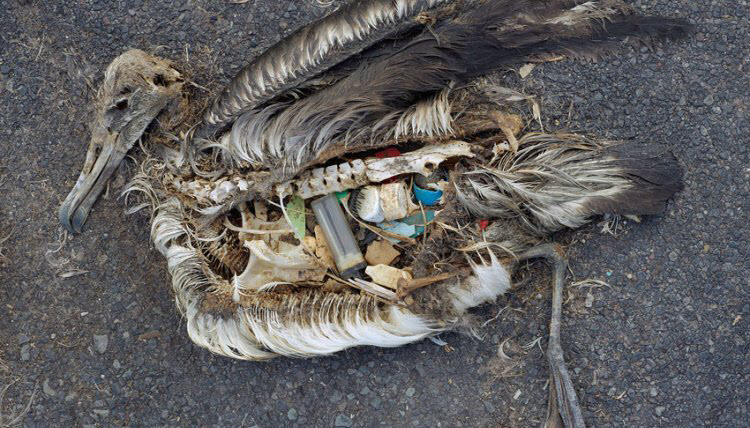 A dead young albatross whose stomach was full of tiny plastic items. It died of starvation by mistaking plastic as food.

Plastic never goes away, and it’s increasingly finding its way into our oceans and onto our beaches. In the Los Angeles area alone, 10 metric tons of plastic fragments — like grocery bags, straws and soda bottles — are carried into the Pacific Ocean everyday.

Today, billions of pounds of plastic can be found in swirling convergences making up about 40 percent of the world’s ocean surfaces.

Plastic pollution has a direct and deadly effect on wildlife. Thousands of seabirds, sea turtles, seals and other marine mammals are killed each year after ingesting plastic or getting entangled in it. Endangered wildlife like Hawaiian monk seals and Pacific loggerhead sea turtles are among nearly 300 species that eat and get caught in plastic litter.

It’s time to get at the root of this ocean crisis. The Center for Biological Diversity has petitioned the Environmental Protection Agency to begin regulating plastics as a pollutant under the Clean Water Act — a crucial first step in reducing the amount of plastic littering the oceans. They’ve also petitioned to designate the Northwestern Hawaiian Islands as a Superfund site.

We’re surrounded by plastic. Think about every piece you touch in a single day: grocery bags, food containers, coffee cup lids, drink bottles, straws for juice boxes — the list goes on and on. Plastic may be convenient, but its success carries a steep price.

In the first decade of this century, we made more plastic than all the plastic in history up to the year 2000. And every year, billions of pounds of plastic end up in the world’s oceans.   Most ocean pollution starts out on land and is carried by wind and rain to the sea. Once in the water, there is a near continuous accumulation of waste. Plastic is so durable that the EPA reports “every bit of plastic ever made still exists.”

Due to its low density, plastic waste is readily transported long distances from source areas and concentrates in gyres, systems of rotating ocean currents. All five of the Earth’s major ocean gyres are inundated with plastic pollution. But it’s not limited to the gyres; studies estimate there are 15 to 51 trillion pieces of plastic in the world’s oceans — from the equator to the poles, from Arctic ice sheets to the sea floor. Emerging research suggests that not one square mile of surface ocean anywhere on earth is free of plastic pollution.

A Heavy Toll On Wildlife

Thousands of animals, from small finches to great white sharks, die grisly deaths from eating and getting caught in plastic:

Fish in the North Pacific ingest 12,000 to 24,000 tons of plastic each year, which can cause intestinal injury and death and transfers plastic up the food chain to bigger fish and marine mammals. A recent study found that a quarter of fish at markets in California contained plastic in their guts, mostly in the form of plastic microfibers.

Sea turtles also mistake floating plastic garbage for food. While plastic bags are the most commonly ingested item, loggerhead sea turtles have been found with soft plastic, ropes, Styrofoam, and monofilament lines in their stomachs. Ingestion of plastic can lead to blockage in the gut, ulceration, internal perforation and death. Even if their organs remain intact, turtles may suffer from false sensations of satiation and slow or halt reproduction. Tragically, the most current research indicates that half of sea turtles worldwide have ingested plastic. 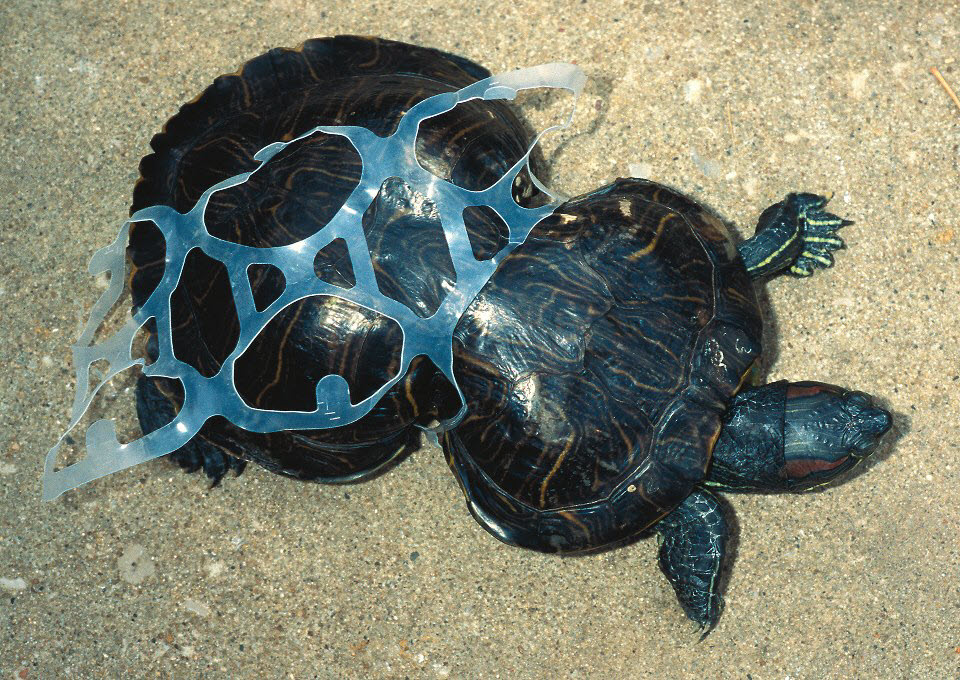 This turtle has had its shell constricted by a piece of plastic waste found in the ocean.

Hundreds of thousands of seabirds ingest plastic every year. Plastic ingestion reduces the storage volume of the stomach, causing birds to consume less food and ultimately starve. Nearly all Laysan albatross chicks — 97.5 percent — have plastic pieces in their stomachs; their parents feed them plastic particles mistaken for food. It’s estimated that 60 percent of all seabird species have eaten pieces of plastic, with that number predicted to increase to 99 percent by 2050. Based on the amount of plastic found in seabird stomachs, the amount of garbage in our oceans has rapidly increased in the past 40 years.

Marine mammals ingest and get tangled in plastic. Large amounts of plastic debris have been found in the habitat of endangered Hawaiian monk seals, including in areas that serve as pup nurseries. Entanglement deaths are severely undermining recovery efforts of this seal, which is already on the brink of extinction. Entanglement in plastic debris has also led to injury and mortality in the endangered Steller sea lion, with packing bands as the most common entangling material. In 2008 two sperm whales were found stranded along the California coast with large amounts of fishing net scraps, rope and other plastic debris in their stomachs.

The EPA Must Act Now

As plastic debris floats in the seawater, it absorbs dangerous pollutants like PCBs, DDT and PAH. These chemicals are highly toxic and have a wide range of chronic effects, including endocrine disruption and cancer-causing mutations. The concentration of PCBs in plastics floating in the ocean has been documented as 100,000 to 1 million times that of surrounding waters. When animals eat these plastic pieces, the toxins are absorbed into their body and passed up the food chain.

As plastics break apart in the ocean, they also release potentially toxic chemicals such as bisphenol A (BPA), which can then enter the food web. When fish and other marine species mistake the plastic items for food, they ingest the particles and pass toxic chemicals through the food chain and ultimately to our dinner plates.

Plastic pollution affects our economy, costing us untold dollars spent in beach cleanups, tourism losses and damages to fishing and aquaculture industries. Beaches and oceans have turned into landfills. Prime tourist destinations are now littered with garbage. Kamilo Beach, in a remote corner of Hawaii, is now known as “Plastic Beach” for the tons of plastic debris that accumulates on its shores.

Eat it Raw!
back to articles