Milk, as an old advertisement says, does a body good. Most, if not all, people drink milk at some point, whether it’s breast milk or formula, and eventually cow’s milk—the closest in composition to human breast milk.

Milk is balanced source of carbohydrates, protein, and fat, and is filled with other nutrients like calcium and Vitamin D. And for some people, it can be really delicious. However, there are those who might not be able to consume this dairy product: It’s estimated that about 90% of Asians are lactose-intolerant, which means they have a hard time digesting the lactose in milk and encounter tummy troubles when they do take in dairy. And then there are vegans, whose diet restricts the consumption of anything that comes from animals. 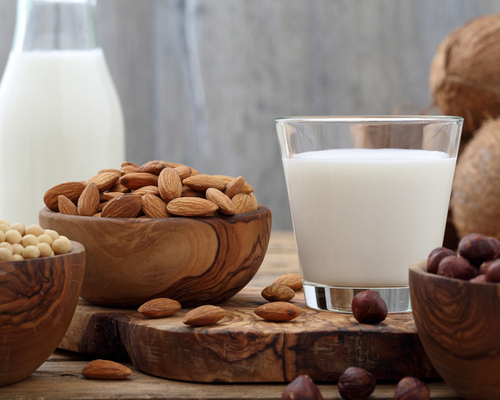 If you’re looking for a cow’s milk substitute, then plant-based milks might be just the thing. There are so many different types now, including almond milk, soy milk, and coconut milk. So, which one is right for you?

A Primer on Plant-based Milk

Plant-based milk, as the name suggests, comes from plant sources—beans or nuts that are ground and mixed with water and other ingredients like sweeteners and thickeners to achieve the consistency of dairy milk. Aside from not having any lactose, plant-based milk is also lower in calories and taste different from dairy milk (in case you’re not a fan of the taste of cow’s milk). Plus, according to a University of Oxford study, they’re better for the environment, as plant-based milk production emits three times less greenhouse gases than dairy milk production.

There are a number of different types of plant-based milks and it all boils down to your preference and needs. Naturally, you should avoid those made from ingredients you are allergic to, as you’ll just be trading in lactose intolerance for other issues. Three of the more common plant-based milks are:

Soy Milk. Soy milk was the first plant-based milk to gain a foothold in the milk market. A study published in the Journal of Food Science and Technology found soy milk to be nutritionally superior to other plant-based milks (particularly almond milk, coconut milk, and rice milk), with a protein and calcium content that’s comparable to cow’s milk. (Note that the relatively new pea protein milk wasn’t included in the study.) Soy milk also has isoflavones, phytonutrients that have cancer-fighting properties.

On the down side, there is some concern regarding the “anti-nutrient” substances in soy, which may make it harder for the body to absorb other vitamins and minerals. There is also some conflicting research on their effect on hormones—some say the phytoestrogen content can increase the risk of breast cancer and hypothyroidism, while others say it can protect against cancers. And lastly, soy milk has a “beany” flavor that may be an acquired taste.

Almond Milk. This plant-based milk doesn’t have nearly as much protein as cow’s milk and soy milk. But there are a number of almond milk benefits: At just 30 calories a serving, unsweetened almond milk has less than a third of the calories in a glass of cow’s milk, so if you’re looking to reduce your calorie intake while still keeping milk in your diet, then almond milk is a good substitute. It’s also low in sugar, as long as you go for the unsweetened variety. It also has a decent amount of Vitamin E and calcium, and is sometimes enriched with Vitamin D. Plus, you might enjoy its subtly sweet, nutty taste, especially when compared with the strong flavor of soy milk.

You can get almond milk from Healthy Options. Take note that if you do choose almond milk as your milk, then you’ll have to get more protein from other food sources.

Coconut Milk. Coconut milk comes from the meat of the coconut which has been shredded, soaked in water, and strained. This milk has a thick and creamy consistency, which makes it great for cooking dishes like chicken curry and ginataang hipon. You can also add it to coffee.

It’s worth noting that coconut milk has a high saturated fat content and no protein—but it does give you a delicious taste of the tropics.

Is Eating All-Natural Pork Better for You?

Where Do Your Eggs Come From?

Hard Boiled Egg Diet: How Does It Work?
back to articles