No matter how careful you are, accidents and illness can still happen—bumps, scrapes, burns, motion sickness, an upset stomach…at one point or another, someone in your household may suffer from any of these. It’s thus essential to have a first-aid kit on hand. A natural first-aid kit is a great option for minor issues as many herbal ingredients have multiple uses—especially convenient when you’re on the go and thus have to pack light. 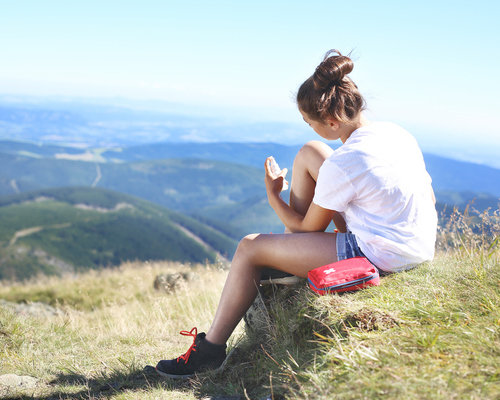 Store these items together with your regular first-aid kit for a quick fix and some peace of mind:

Bandage. Sterile band-aids, gauze pads, bandages, and adhesive tape are an essential part of any first-aid kit. These can control bleeding, protect an open wound from infection, and can be used to support a splint or body part.

Witch hazel. The leaves, bark, twigs, and extract of this plant have long been used in folk medicine to treat everything from skin ulcers and sores to colds and dysentery. These days, it can also be found in commercial skin-care products. Witch hazel contains beneficial flavonoids and tannins—enough for the U.S. Food and Drug Administration to give it their OK.

According to a study in the European Journal of Pediatrics, witch hazel is similar to dexpanthenol ointment, which is a topical treatment for minor skin injuries and diaper rash, and can be safely used for certain skin disorders of children. (It’s still best to consult your pediatrician or dermatologist regarding treatment of skin issues, especially if the issue is severe.) Another study found that witch hazel can also soothe a sunburn irritation.

Aloe vera gel. This succulent plant with long, spiky-edged leaves has anti-inflammatory properties that, according to a 2007 review, may be an effective treatment for first- to second-degree burn wound healing. While it’s ideal to get aloe vera directly from the source, you can keep an aloe vera gel in your homemade herbal first-aid kit when you travel—just make sure you get a product with a high concentration of aloe vera and avoid additives like fragrances.

Tea tree cream. Tea tree oil is distilled from a plant native to Australia and has been shown to have antibacterial and anti-inflammatory properties. In one study published in the British Journal of Dermatology, tea tree oil was found to reduce histamine-induced skin inflammation (a.k.a. skin flare-ups due to allergy). Tea tree oil may also be used as a disinfectant on wounds, keeping harmful bacteria away.

Because tea tree oil is highly potent, it’s best used with a carrier oil. Given the limited space in first-aid kits and the need for portability, it’s a good idea to have tea tree cream in your stash instead—great for itchy emergencies and little nicks and cuts.

Chamomile tea bags. A review published in the journal Molecular Medicine Reports lists the many traditional uses of chamomile. Among them, that chamomile is “widely regarded as a mild tranquilizer and sleep-inducer,” which is attributed to its flavonoid content. The caffeine-free beverage has long been used to help in relaxation and is mild enough for children to drink.

Aside from ingesting chamomile tea, you can also use the tea bags topically on skin irritations and even on wounds—the same review cited a trial wherein chamomile was able to speed up wound drying and healing.

Ginger. Hot, biting, warming, this rhizome has a strong flavor profile that gives dishes and tea a distinctive flavor, and that has been used for ages in traditional medicine. It’s handy to keep a stash of the stuff in your natural first-aid kit, whether it’s in the form of capsules, tea bags, or crystallized ginger.

While studies on the health benefits of ginger aren’t conclusive, it has long been used to calm an upset stomach and relieve indigestion and bloating. Research suggests that it helps with alleviating nausea (the uncomfortable feeling in the throat and stomach that may result in vomiting) and vomiting (the involuntary expulsion of the contents of the stomach): A 2016 study concluded that “ginger is an effective and inexpensive treatment for nausea and vomiting,” particularly during pregnancy and chemotherapy. Another study published in the American Journal of Physiology: Gastrointestinal and Liver Physiology states that “ginger may act as a novel agent in the prevention and treatment of motion sickness”—worth a shot for those who feel ill on road trips, planes, and boats.

5 Things Every Man Needs on His Bathroom Shelf

Is the Keto Diet Right for You?
back to articles