It’s often said that it’s important to invest in a good mattress, given that you spend (or should spend) a third of your life in bed. The price is well worth it for something that’s an integral part of your day and your wellbeing. But when it comes to other things used on a daily basis, people tend to try to cut costs, saving money by choosing low-priced, low-quality items, and sometimes buying in bulk. But shouldn’t you in fact be spending more on things that you regularly use?

Take bath soap, for example. It’s something that you ideally use at least once a day. Because so much of it is used so often, most people tend to go for the commercially produced, inexpensive soaps. But wouldn’t it be better to spend a little extra on something that comes in such close contact with your body every single day? Instead of using mass-produced soap, why not try French triple-milled soap? 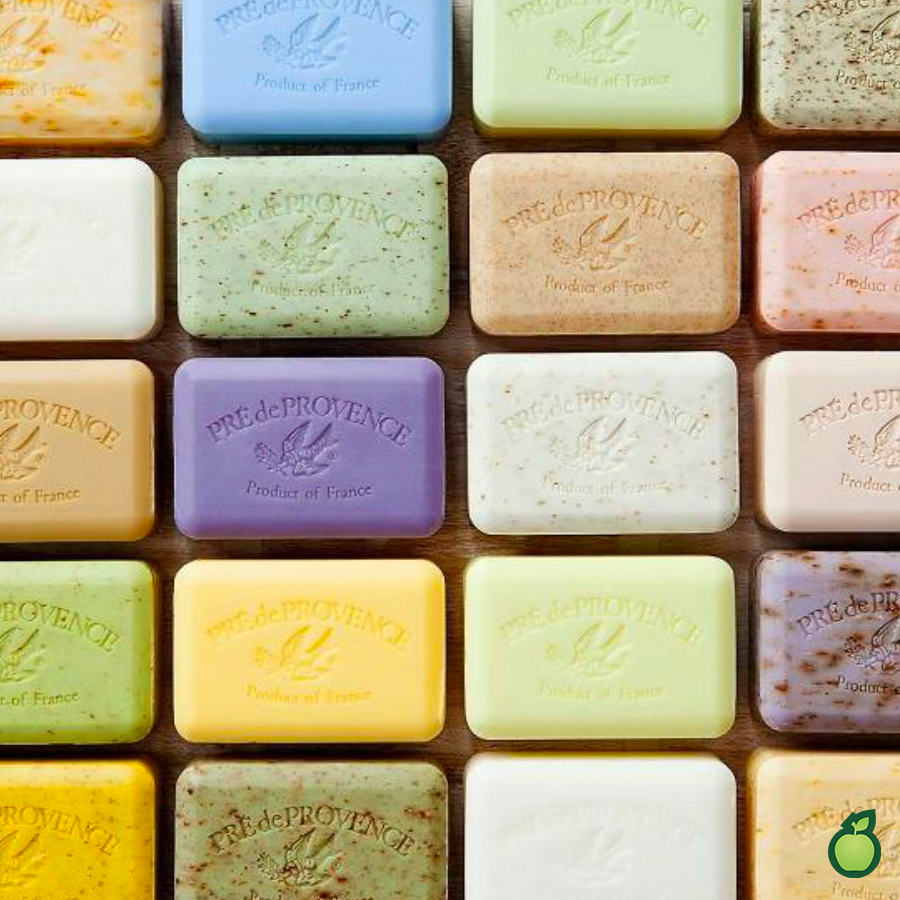 There are so many different kinds of soap that it can get confusing but essentially all soaps work the same way: They strip a surface of oil and dirt with the help of water.

Soaps are made through a process called saponification: mixing fat (vegetable or animal fat) with alkaline (typically lye). The resulting mixture is then broken down and rolled (or milled) to remove excess water. Fragrances and colors are added before the mixture is turned into blocks of soap and, finally, cut up or molded into bars.

Today’s commercial soap bars usually have chemicals mixed in, instead of natural fat and alkaline, making them hard, cheap, and easy to produce. But more and more people are rediscovering more traditional soaps, made with vegetable oils such as olive oil and coconut oil, mixed with essential oils and other natural ingredients for a delicious scent.

You may have heard of Castile soap, which is made with olive oil from Castile, Spain; Marseille soap, made in a region of France for hundreds of years using pure olive oil; and glycerin soap, which is a translucent soap that is popular with those who have sensitive skin. French triple-milled soap is another of these specialty soaps that can add an indulgent touch to your daily routine.

French triple-milled soap is made of natural ingredients and, as the name suggests, goes through the milling process three times or more, which means that more moisture and air are removed and ingredients are better incorporated.

A process that originated in France hundreds of years ago, triple-milling yields more pliable soap that can be more easily molded into different shapes, like those adorable seashells in luxe gift baskets. But they also end up being harder and denser than commercially produced soap—the best quality triple-milled soaps don’t break apart or turn into a mushy mess on your soap dish after some use. Plus, they typically last longer than your average mass-produced soap. Colors are vivid and uniform all throughout.

French triple-milled soaps also produce a smoother, richer lather than other soaps. They’re also milder than conventional soaps and are thus great for those with sensitive skin.

Ready to switch to French triple-milled soap? First things first: Be sure to check the ingredients list. You’re on the right track if the first ingredient is a vegetable oil and if it contains familiar, natural ingredients like shea butter and essential oils. It’s natural to sniff a bar of soap before purchasing it but if there’s a very strong scent, chances are, artificial scents have been used. And it goes without saying that it shouldn’t say “French” if it wasn’t made in France!

Try A la Maison de Provence’s Bar Soaps (available at Healthy Options) that come in subtle scents like Fresh Sea Salt, Oat Milk, and Sweet Almond. Want your bar of soap to be as mild and as natural as possible? Go for the unscented version. All of A la Maison’s soaps are made using the traditional French process, contain palm and/or vegetable oils, and have no harmful chemicals like parabens.

It might seem like the height of luxury but once you try French triple-milled soap, you may never go back to your ordinary soap. And you know what? You deserve it!

What is Metabolic Conditioning and How Does It Work?

How to Choose a Multivitamin for Your Child
back to articles