Perhaps its unusual cycle gave it its mystical name: Witch hazel blooms in fall and winter, showing off its spidery golden-yellow petals while other flowers are on their yearly hiatus. And perhaps that is what drew Native Americans to this North American plant—surely, something that flourishes in cold weather while most everything else is asleep must have some magical powers. 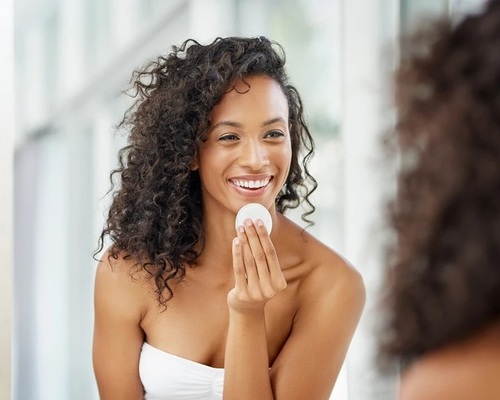 While it’s been used for centuries to treat various ailments and is now a popular ingredient in skin-care products like makeup remover, witch hazel is more than just a folk remedy, a woo-woo ingredient, or a marketing ploy; it is actually one of only a few botanicals with U.S. Food and Drug Administration (FDA) approval.

An article published in The Atlantic touches on the history of witch hazel (scientific name hamamelis virginiana), stating that various Native American tribes used it for different purposes: One tribe used the bark to treat skin ulcers and sores, another used its twigs in sweat lodges to soothe sore muscles, and still another made witch hazel tea to treat colds, coughs, and dysentery. It was—and is—even used by literal witches to ward off evil. Modern beauty products use it as an ingredient for lotions, creams, and hair products.

It’s not all witchcraft, however. Witch hazel does contain flavonoids and tannins that may be beneficial, as studies have suggested, and seems to be effective enough for the FDA to give it a thumbs up.

The leaves, bark, twigs, and extract are used in various preparations, from medicine to skin-care products. Studies have been largely inconclusive, but they seem to indicate that witch hazel has anti-inflammatory and antibacterial properties that have wide-reaching benefits:

Due to its skin-tightening tannin content, you can also try witch hazel for pores to see if it can minimize their appearance. If you have dry skin, look for an alcohol-free product or one that incorporates skin-moisturizing ingredients like aloe.

Witch hazel for reducing redness. A few studies, including one published in the journal Dermatology, found that witch hazel can be effective against skin irritation and may help reduce redness, particularly by suppressing erythema (reddening from injury or irritation).

Witch hazel for hair. A study published in the International Journal of Trichology found that products with witch hazel can be used as a treatment of the scalp, particularly for problems related to red scalp and scalp burn-out.

Due to its astringent properties, witch hazel may also be an effective treatment against dandruff. You can apply some to a cotton ball and dab onto your scalp before shampooing. Keep in mind though that given its drying abilities, witch hazel is best used by those with oily hair. You may want to steer clear if you have dry hair as this may exacerbate dryness and itching.

Witch hazel is generally safe for adults but, as with any new product that you want to try for skin, hair, or general health, you should exercise caution. Whether you use witch hazel for pores, for hair, or other purposes, start with minimal doses. Do a patch test for anything topical and keep an eye out for reactions, and consult your doctor prior to using it if you have existing conditions.

Ancient Grains: Benefits of Kamut, Teff, and Amaranth in Your Diet

What are French Triple-Milled Soaps?

How Amino Acids Can Help Your Mood

Can You Get Vitamin D Without the Sun?
back to articles