Got the munchies? You might be tempted to reach for a bag of potato chips. After all, they’re readily available in convenience stores and supermarkets, and are very affordable. But that may come at the price of your health: Potato chips have over 500 calories per 100g and are loaded with sodium, not to mention fat. And since the average person can’t just stop with one chip, that little taste can end up turning into a binge-fest. A Harvard study even cites potato chips as one of the top contributors to weight gain. 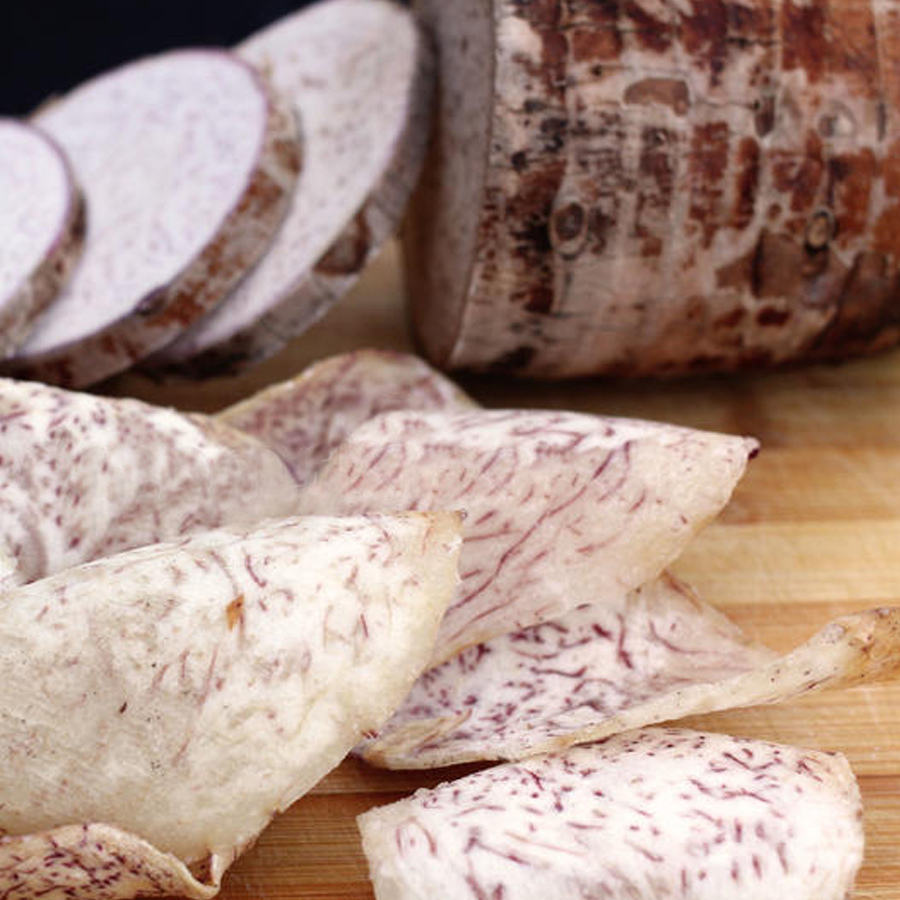 Consider instead baked or fried taro chips. While there are plenty of other potato chip alternatives like baked apple slices, banana chips (watch the sugar), and kale chips, taro has a similar taste and texture to potatoes, but with a lot less fat, more fiber, and more vitamins.

Taro (scientific name: Colocasia esculenta) is a root vegetable that is a staple food in parts of Asia, Africa, South America, and the Pacific Islands. The plant has large leaves and its corm somewhat resembles a turnip. Inside, it has white flesh with hints of purple. Both its leaves and its corm are used in cooking. Locally, it is known as gabi and is used in laing (taro leaves cooked in coconut milk), sinigang (though it is sometimes replaced with radish), and ginataan. It’s even used to make ice cream!

Nutrition-wise, cooked, unsalted taro is a low-protein, low-fat food, with over 34g of carbs per 100g serving. It also contains a number of vitamins, such as vitamin E, minerals, and fiber. Because of its nutritional makeup, taro offers a number of health benefits and may be used to address some health concerns.

Managing blood sugar. The Department of Science and Technology’s Food and Nutrition Research Institute reported that taro, along with sweet potato, cassava, and yam, have been found to have a low glycemic index (GI).

This means that they are among the foods that, when consumed, release glucose into the bloodstream at a steady and sustained rate. Low GI foods are beneficial to those who are at risk for coronary heart disease and type 2 diabetes, and also help those with diabetes manage their blood sugar.

Reducing risk of hypertension. Taro is a good source of potassium, an electrolyte that is helpful in reversing the effects of sodium on the body. An increased potassium intake can thus lower blood pressure and decrease the risk of heart disease and hypertension. Bonus: Potassium has other benefits like preventing muscle cramps and enhancing bone health.

Therapy for cancer. Breast cancer mortality is usually due to metastasis, or the development of other malignant growths from the primary cancer site.

A 2012 study reported that a therapeutic agent derived from taro was shown to inhibit tumor metastasis. Another study in 2014 at the University of Maryland, Baltimore further looked at the potential of taro as a therapeutic agent against metastatic breast cancer and other aggressive cancers.

Medical nutrition therapy. Poi is a native Hawaiian dish made by mashing cooked taro and mixing it with water. It can be eaten fresh or left to ferment. In a study of the medicinal uses of poi, researchers hypothesized that poi could be used as a probiotic for medical nutrition therapy, as lactic-acid-producing bacteria are produced in the fermentation process. More research is needed, but researchers also cited evidence that points to poi as a promising treatment for infants with allergies or failure-to-thrive.

How to Make Taro Chips

Since taro chips aren’t a mass-market product, it’s not easy to find taro chips for sale. So why not make your own? This way, you get to control what goes into—no preservatives and just a moderate amount of salt (if any).

There are just four taro chip ingredients: taro, oil, salt, and pepper. To make chips, peel and slice the taro thinly (a mandolin does the job best). Lay the slices on a baking sheet without overlapping them and brush with some oil. Season with salt and pepper (go easy on the salt if you’re watching your sodium intake). Bake at 400F until crisp.

There are many ways to consume taro; chips are just one of them. In whatever form you choose to eat it, taro must be cooked before it’s consumed, whether you’re using the corm or the leaves. Raw taro contains calcium oxitate, which is toxic to humans, but the chemical is destroyed when cooked.

Non-Wheat Pasta Is a Gluten-Free Alternative, But Is It Actually Healthier?

How to Beat Stress With Adaptogens

Can Eating Garlic Aid in Weight Loss?
back to articles