Matcha seems to be everywhere these days, from lattes to cheesecakes to cookies. But the bright green tea is not a mere trend; in fact, it’s been around since the 12th century. Read on to learn more about this tea and how drinking matcha can be good for you. 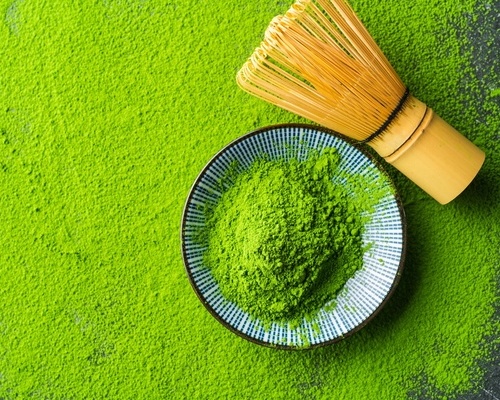 Some people use the terms green tea and matcha interchangeably but they aren’t the same. While matcha is indeed a form of green tea, the way the two are made is markedly different.

Green tea is made by steeping leaves in water; the leaves are then discarded so you end up drinking their essence. Matcha, on the other hand, is made up of ground-up tea plants mixed with water; the plant becomes part of the drink. It’s the difference between having vegetable broth and the actual vegetables—instead of just drinking the water that tea leaves were steeped in, you take in the nutrient-rich leaves themselves.

Matcha tea plants are grown in the shade so as to increase their chlorophyll production—thus giving them that distinctive bright green color—before being harvested, dried, and stone-ground into powder. This powder is then mixed with hot water. Traditionally, a teaspoon of matcha is mixed with a third of a cup of water at a very specific temperature (less than a boil), whisked with a bamboo brush until frothy.

Green tea has been used for centuries in traditional medicine to aid in digestion and to treat various ailments. In more recent times, studies have investigated the benefits of green tea and proven that traditional medicine is right after all: There is certainly a link between the drink and improved health.

The health benefits are mainly due to green tea’s powerful antioxidant activity; it has been fond to be the best source of catechins, disease-fighting compounds that are more powerful than Vitamins C and E. Since matcha is much more potent than green tea, you can expect it to pack a more powerful health punch, giving you supercharged benefits.

Some of the green tea, and therefore matcha, health benefits are:

The best quality matcha comes from Japan. It should feel smooth and should have a slightly sweet taste; grainy matcha that has a yellowish tinge isn’t made from the best leaves. Because of the laborious process to make matcha, the good-quality kind is usually pricey. If you find cheap matcha powder, it may have been mixed with sweeteners to give it a more pleasant flavor.

Aside from giving you the abovementioned health benefits, matcha may also help alleviate your stress, and not because of its compounds. Matcha has traditionally involved meditation; the very act of making tea and sitting still to sip it can be calming. So, take a break from a busy day, make yourself a cup of matcha, and savor the stillness.

Amino Acids: What They Are and Why You Need Them

Dried vs. Frozen Blueberries: Which Is Healthier?
back to articles